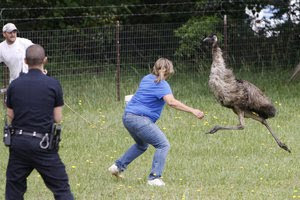 This blog has reported more than once on the recurring problem of emus on the loose. Setting a high standard for how to react in this situation were a group of citizens of Rock Hill, South Carolina:

Dauntless but "sure enough there was an ostrich runnin' right by my nose so I couldn't just sit by and do nothin'," house painter Jerry Gibson armed himself with an electric drop cord Tuesday morning and took off running after the giant bird that ran 5 feet from his unbelieving eyes.

The large flightless bird was actually an emu, but no one stopped to consult a reference book. Rather, neighbors leapt to assist, or at least encourage.

If you've never been up close with an emu, don't downplay the nerve required here. They've got feet like a dinosaur and an attitude to match:

"Figured I could get up to him and lasso him," said Gibson. "I was right about gettin' up to him. Had him by the neck feathers. Wrong about the lassoing though. And he sure give me a fight when I tried to grab a hold of him. Tough sucker, strong, he run off on me."

Gibson tells no tales either, as that emu scraped him on his leg and arm after he pulled a sneak attack near a fence just off Main Street. Although Gibson grabbed onto that emu like a mother-in-law grabbing a purse off a 75-percent-off sale rack, he got bullrushed by the emu for his trouble and left bloodied yet unbowed.

And, showing that it's never too late to join the fight against bad animal behavior, the hero of the day was a 75-year-old:

The chase added dozens of Pied Piper-like chasers including the cops, and culminated with the emu's capture by a veteran emu wrangler who just so happens to be a senior citizen with Popeye forearms named Bobby Mangrum. Mangrum was armed with nothing but a fishing net and a bellyful of courage.

"Got him!" Mangrum called out as he tackled the bird, then got some help to keep the emu down until Mangrum could tie the emu up with a dog leash an officer named Sgt. Lee McKellar grabbed from one of the chasers just in the nick of time.

Read the whole story by Andrew Dys at the Herald Online. I mean it, go read this one; I'm really going to have to start giving some kind of award for local coverage of bad animals, and along with the recent goose story from Illinois, this one's a definite nominee.