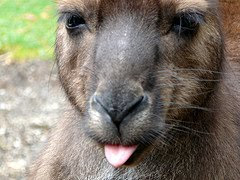 Perhaps naming the area "the Honeymoon Ranges" gave one kangaroo the idea that it was the right place to look for love. But the human females of Australia are understandably less than thrilled with the attention. The Northern Territory News reports:

One resident who walks along the bike track to the Mary Ann Dam regularly said she realised she was being followed early one morning.

"I turned around and saw this big kangaroo behind me, so I hastened my steps," she said.

"It seemed a bit odd, but I continued walking and didn't think much about it.

"Then on the return walk he was there waiting for me," she said.

"With his male pride on full alert, he started circling me.

"There was no doubt about what he wanted, the randy old thing.

"It was a huge kangaroo and quite intimidating.

"I yelled at him to go away, waved my hands about and let him know I wasn't interested, but he was persistent - I'll give him that."

The kangaroo was also reported to have approached the crowd at an evening car race and chatted up a woman who approached him thinking he was just "a cute, friendly kangaroo."

Tanya was oblivious to the amorous nature of the interlude, but the kangaroo's intentions were clearly evident to other speedway fans.

"Yeah, apparently he was quite aroused," she said.

She got off easy, but let's hope the women of Australia take a lesson from this. For safety's sake, better assume animals are guilty until proven "cute and friendly," not the other way around.