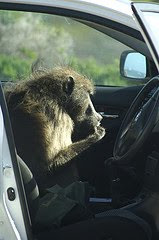 Roving bands of baboon thieves are nothing new - for example, we've recently reported on them attacking the wine grape crop in South Africa.

And it might be fair to say that people who choose to go to a drive-through safari park have only themselves to blame when they encounter primates that have learned to open rooftop luggage carriers.

But even tourists who're carefully stashing their passport in an inside pocket and staying to the main roads are at risk in South Africa, and authorities are concerned that the upcoming World Cup may result in mayhem that has nothing to do with soccer hooligans.

At one scenic outlook near Cape Town, a particular baboon called Fred has made a career of trying the handles of parked cars. Baboon tracker Mark Duffell explains:

"He'll hit four or five cars in like five minutes. Fred's operation is to open car doors. He leaves normally with a handbag. Until he's satisfied he's got all the food, don't try get the bag back."

Fred has bitten at least three tourists, and the baboons are not only brazen thieves, they're also sexist pigs. Efforts to move them along with whistles, shouts, and whip-cracks have to be conducted by men, because the baboons ignore women.

Concerns are rising in the leadup to the World Cup because, as readers of this blog know, the only thing that's worse than a badly behaved animal is when you add a human to the equation. Scientists agree that people are part of the problem:

and that, despite clearly stated warnings, they are just as hard to train:

"The city council spends a fortune on putting signs up -- 90 percent of this happens right underneath these signs," said Duffell.

See video here that may very well be Fred (as well as similar behavior elsewhere in Africa here). And that's probably also the same culprit in the photo above from Flickr user Tim Ellis.