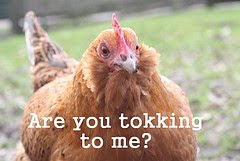 Now there's a title for a journal I'd subscribe to in a minute. But since it doesn't exist, I'll try to keep you all up to date:

-In Wales, PhD student Hanna Nuuttila is using high-tech listening devices to figure out why dolphins beat up on porpoises.

This carries on from a previous acoustic monitoring study she did for The Seawatch Foundation, prompted by the discovery that Cardigan Bay dolphins were killing porpoises.

"When dead porpoises stranded, you could tell dolphins were involved from dentition marks in their flesh," she explains.

"The porpoises were also suffering massive haemorrhages and their internal organs were all mushed up. They were being battered to death, really."

My hypothesis is that the reason is "because they're assholes," but I understand: this is science and hypotheses must be tested, not assumed. We look forward to the results of this research.

-Purdue University scientist William Muir is working to breed a strain of chickens that won't kill one another. This is necessary because humans want to raise chickens more humanely, and here's how they thank us when they are kept in groups in large enclosures instead of in solitary confinement:

"If you have a lot of birds that want to be top bird there's going to be fighting," Muir said. "If you leave their beaks intact it's a bloodbath. They will literally kill each other. It's kind of a dominance thing. ... They just peck each other to death."

-Finally, scientists in England have found that wild birds are skeptics about the claims that organic food is better. In a three year study, birds consistently ate more of the non-organically-grown seed, searching it out when feeders were switched around.

Researchers suggested that this might be due to the fact that the non-organic seed was actually more nutritious, with a ten percent higher protein content. But I don't know if that's it. Have you ever tasted some of the stuff they sell in those organic markets? Animals may be bad, but they're not idiots.