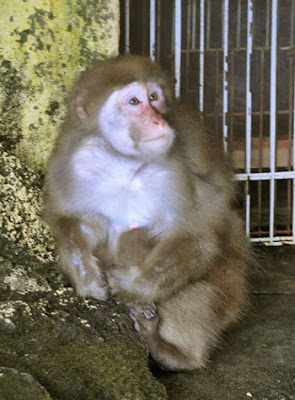 Back in the fall we reported the heroic capture of a monkey that had been terrorizing residents of a city in Japan and was believed to be responsible for attacks on over 100 people. The city had set up a team of over 150 volunteers, city staff, police and rescue workers to go after it, but the eventual capture was a result of the quick thinking of some average people:

Municipal government officials said the monkey was spotted on the second-floor balcony of the home of 33-year-old resident Yuki Yoneyama at about 12:30 p.m. on Sunday. His 36-year-old wife opened the window to their children's room, and when the money went inside, Yoneyama shut it from the outside, trapping the animal.

The monkey was given the name Lucky, and she certainly was: rather than being punished, she was given accomodations at the local zoo. And rather than being resented, she became a local favorite, appearing in a TV commercial and having her own Twitter account.

But clearly Lucky doesn't appreciate how lucky she's got it. She was just biding her time, and on Monday, she took advantage of an inattentive zookeeper who left a cage door open and made a break for it.

Officials instructed citizens to assume that Lucky was armed and dangerous and to keep their doors locked, but fortunately, she never made it off the zoo grounds, and was recaptured 24 hours later.

Let's hope that keepers are no longer lulled into a false sense of security by this criminal's popularity, and treat her like the dangerous prisoner she is from this point onward.

Mug shot of the culprit and cartoon from The Japan Times.