News briefs from 'round the world 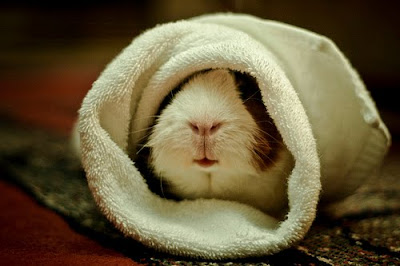 -Taiwan: A man is bringing suit over being insulted by a bird. His neighbors have a pet mynah, which, like a parrot, can be trained to speak. He claims that in retaliation for a previous conflict, they've taught their bird to call him a "clueless big-mouthed idiot:"

He alleges the bird’s harsh words caused him serious distress, and claims he suffered burn injuries after the bird made him lose concentration at work.

His neighbors deny the claim, and why not? Maybe it's the bird's own opinion.

-Britain: A police surveillance helicopter detected a hot spot in a West Yorkshire home. This is usually the sign of equipment for large-scale indoor marijuana production, so they got a search warrant and raided the home.

The surprised homeowner led them to the culprits: two guinea pigs cuddled up in front of a space heater.

-Belarus: It's actually relatively common for dogs to shoot their owners with guns. (See here and here, for example). Now other canines have taken their lead. A hunter shot a fox and then tried to finish it off by hitting it with the butt of his rifle. The fox retaliated by shooting him with his own gun:

‘The animal fiercely resisted and in the struggle accidentally pulled the trigger with its paw,’ said a police officer called to the scene.

"Accidentally," sure. The fox escaped. The hunter was taken to the hospital, where, out of embarrassment, he requested that reporters not print his name.