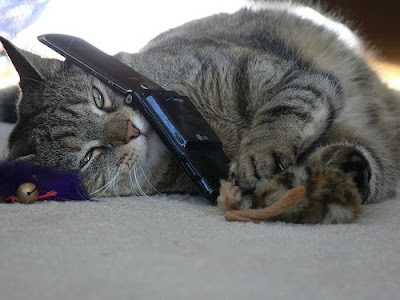 The British make life much too easy for their bad cats. A couple of weeks ago we saw that instead of getting the feline obesity problem under control, they now have special cat doors for fat cats.

And there's one type of bad behavior that's much easier in Britain than it is in the US: making false reports to the police. We've seen a canine culprit before, but now a cat has done it too. It's an simple prank there because the emergency number is 999, something even an illiterate creature can pull off:

Retired lecturer Howard Moss was woken by police officers in the early hours of the morning demanding to know why he had contacted them.

In bleary-eyed embarrassment he assured the officers that he was alone in his house in Brynmill, Swansea, South Wales, and had certainly not made the call.

'The police insisted that it was not a spook call because it had originated from inside the house,' the 64-year-old said today.

Then one of them noticed Ginger the cat sitting on the phone and he twigged right away. He said "The cat's done it", it was the only possibility.'

He said his 12-year-old pet had recently taken to sprawling over a small downstairs telephone table in the evenings.

'Ginger had somehow managed to ease off the receiver and by a bit of a miracle one of his paws had pushed the 9 button on the large keypad three times.

'Obviously, he couldn't leave a message but when the police got no answer they treated the call seriously.'

Unfortunately, this attitude faded quickly, and all involved failed to take the implications seriously:

He added: 'When the police realised what had happened they were quite amused. I asked them if they had ever had a call-out like that before and they shook their heads.... The more I think about it, the funnier it seems.'

It's obviously far too simple for British felines to both embarass their owners and tie up crucial public safety resources. If they were to coordinate their efforts, and distract a large number of officers at once - Instead of laughing, shouldn't we be worried about what they might be planning?


Cat up to no good by Flickr user cbowns.