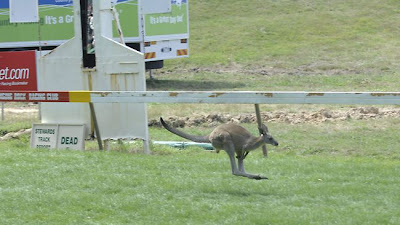 For 125 years there's been a race on Australia Day on the track at picturesque Hanging Rock. This year a crowd of around five thousand had gathered to watch the Hanging Rock Cup, one of only two races run on the site each year.

But the crowd was not made up only of humans, and that's where the trouble started.

"Country race meetings, kangaroos, barbecues - that's what Australians are all about, isn't it?" Hanging Rock Racing Club manager Mark Graham told a reporter. And, he said, the roos usually stay behind the fence after being "encouraged out" by the staff.

But this year, "encouragment" wasn't enough to keep the mob in its place. Despite the construction of a higher fence last year to prevent just this problem, six roos cleared it and took over the track.

"We tried to gently usher them out but they just kept coming back. They're so friendly with humans that they wanted to mingle," Graham said, making it entirely unclear whose side he is actually on.

The invasion forced the cancellation of the race, although one kangaroo gave an idea of what it apparently thinks is a more appropriate sporting event for Australian spectators:

One kangaroo wowed the crowd with a dash down the home straight.

"This kangaroo hopped right down the straight from about the 350 mark, past the winning post," Mr Graham said.

The crowd is reported to have cheered, a huge mistake in the opinion of this blog. Do you really want to encourage them?