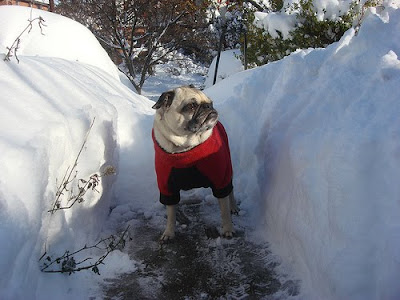 This blog is pleased that the latest ice storm turned out to be rain. But don't get all excited about the news that the groundhog did not see his shadow yesterday. An analysis by the National Oceanic and Atmospheric Association shows that when it comes to forecasting the weather, the rodent's no better than humans: from 1988-2010 there was no correlation between the groundhog's prediction and the weather for the rest of the season.

Punxsutawney Phil's forecast was seconded by New York City's groundhog prognosticator, again assisted by Mayor Bloomberg, who has learned his lesson after being bitten in 2009: he wore heavy gloves.

But two random rodent opinions don't make a right, so don't pack those winter boots away just yet.

Sorry for the bad news. The only comfort I can offer is some links to settle in and read next time you're snowed in:

In Smithsonian magazine: Some long-form bad animal reporting on feral pigs in Texas.

A highly disturbing post about animals commiting sexual assault on humans, including the tale of a victim of attempted rape by a sea turtle. Stop laughing! It's not funny!

Scientific American suggests that you might be afraid of the wrong animals. (Here we suggest, of course, don't trust any of them.)

And not to lose sight of how we are our own worst enemies when it comes to our relationship with other species: courtesy of Cracked, Animals that humans have accidentally made way scarier.