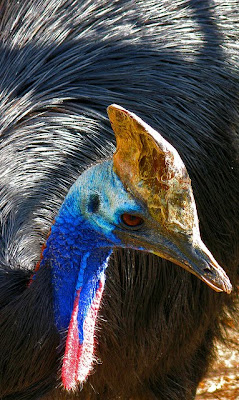 Poor Australians. Even under normal circumstances, animals are out to get them. The country is filled with venomous snakes, spiders, and jellyfish, and even a cute wombat can go mad and try to kill you.

On top of that, recently the weather has been after them as well, with devastating flooding all over the country.

And now, the two have combined: Residents of Queensland have been warned to watch out for cassowaries coming out of the forest to look for food, since cyclone winds have stripped the trees of fruit.

If you wonder how dangerous a mere bird can be, you've never been close to a cassowary. They can be up to six feet tall and over a hundred pounds, and it's said that they can disembowel a human - or even a horse - with one kick of their dinosaur feet: 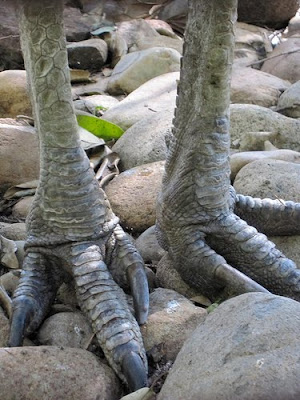 Although only one human death by cassowary has been confirmed, one zoo I worked at had a short list of animals that staff were prepared to shoot to kill if they escaped and endangered humans. The list mostly consisted of the usual large and/or carnivorous suspects - and, the cassowary.

This is not a creature you want to mess with. Australian authorities are so concerned about the situation that they are actually planning airdrops of food into cassowary habitat to keep them away from populated areas.

Somewhat oddly, at the same time, scientists have announced an iPhone app that allows people to report sightings of cassowaries to help with conservation research. But maybe this is actually good timing: How about working to deploy this technology to report cassowary locations so people know where to stay the heck away.


Cassowary giving you the eye by Flickr user mrgarris0n and feet by mulch thief.