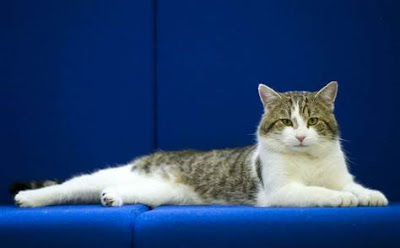 I recently noted a disturbing fact: there are nearly three times as many posts about dogs on this blog as there are about cats.

Given how many cats share our homes, this can't be right. I have long suspected that cats have the power to cloud our minds. Why else do we continue to feed them and pay their bills when they no longer serve a useful purpose for most of us?

Now a scientific study suggests that my suspicions may have some basis in fact.

Researchers discovered that pet cats are skilled at manipulating their owners into feeding and petting them. They even suggest that our relationship with a cat is like a relationship with another human - a particularly demanding sort of human, in fact: "Both cat and human infant are, at least in part, in control of when and what they are fed!" one author told Discovery News.

You may like to think you're too smart to fall for it, too tough to be bossed around by a small furry animal. But you may not even be aware of what's happening. The scientists found that the methods cats use are so subtle, they're basically subliminal messages: in some cases "a single upright tail move" is all it takes to get the owner's affectionate petting.

So if cats can do that, I have to wonder: are they somehow preventing me from writing about what they're up to? Could they be tired of settling for merely free room, board, and petting? Any plot would have the advantage that it's very hard to raise our suspicions about cats. We saw in my last post that they've figured out they can even steal the neighbor's underwear and people just laugh.

And news from elsewhere is even more unnerving. The new cat at the British Prime Minister's residence recently had to be bodily removed when trying to crash a photo op.

Larry the cat was hired merely to eliminate rodents. But perhaps he was interested in infiltrating the government for a very different purpose. If he'd managed to grab the mike, what would he have announced?