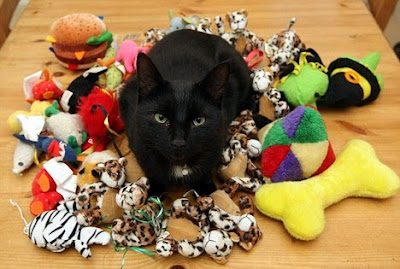 A cat in San Mateo, California has gotten a bit of attention lately for a three year long spree of burglaries.

Dusty's owners say he's stolen around 600 items: gloves, shoes, toys, even underwear. You can watch a TV interview here, with night camera footage filmed by Animal Planet that leaves no doubt what is going on.

He's a hard-working criminal, and also thorough: Dusty will make two trips to get both members of a pair of socks or shoes, and one neighbor reports that the cat stole her bikini top, and then came back for the bottom.

The coverage is all very lightheared, and one of Dusty's owners says that the victims don't complain: "I think they find it kind of funny."

But with the usual lack of in-depth investigative research that is sadly typical of TV, what's being missed here is that this is not an isolated incident. On this blog, we reported this past summer on a cat named Oscar in England, who stole dozens of socks, various ladies' and children's underwear, builder’s gloves, a knee-pad, a paint roller, rubber gloves and gardening gloves.

At almost the same time, Houdini, a cat in Seattle, was stealing gloves from all over the neighborhood. His owners put out a bright orange bucket where neighbors could come and look for the missing property.

And a couple of years before that, a cat named Frankie in England was in the news for stealing dozens of cat toys from nearby homes.

In that early case, Frankie stuck mostly to cat toys except for a few old socks and rubbish. Houdini stole human possessions, but nothing too valuable - worn-out gardening and latex gloves that wouldn't cause too much of a ruckus.

But Oscar and Dusty show that the trend is moving in an ominous direction: the lastest culprits have discovered that they can even steal our most intimate garments without raising more than a giggle.

They've laid the groundwork. They're living in our homes. Where will they take it next?