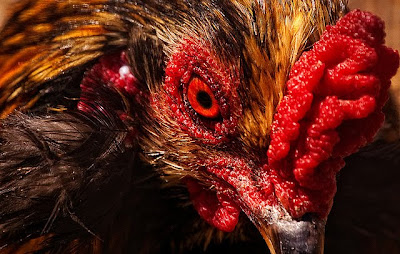 Regular readers of this blog should know this already: there is NO animal you can trust. But if you're still not convinced, watch out, because the most unexpected can even turn out to be killers, as some recent stories show.

-In California, a chicken committed murder: A man was stabbed by a knife attached to the leg of a fighting rooster. He was taken to the hospital but died about two hours later.

- A case of invertebrate manslaughter in England: A nineteen year old girl was killed in a collision caused by a malfunctioning traffic signal. A police investigator discovered that the problem was caused by a snail or slug: "There was a trail across the circuit board and it had short-circuited it – it was one of those things, it's a tragedy."

- And don't let down your guard because some poor creature has a disability: In Nepal, a blind rhino was recently given a one year jail term for murder. The ungrateful beast had been rescued from villagers who attacked it, causing it to lose its sight. It had long posed for pictures with tourists uneventfully, lulling everyone into a false sense of security - till it attacked the priest of a local temple, who died of his injuries.


Seriously, don't get as close to a chicken as MisterQueue did to take that picture.