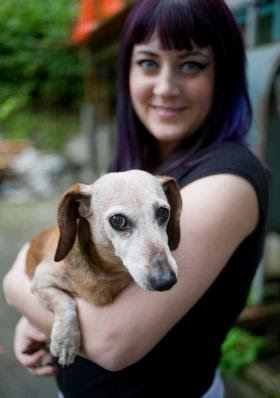 They warn you not to get between a mama bear and its offspring. But someone needs to tell bears that they better not get between a human woman and her beloved dog.

Brooke Collins let her dogs out as usual one evening, but then heard her dachshund Fudge barking, making “the most horrible sound in the world.”

And then, she told the Juneau Empire, she saw a bear crouched down, holding Fudge in his paws, biting his neck: “That bear was carrying her like a salmon.”

Collins didn't even have a vegetable to use for defense, but that didn't stop her: She ran up to the bear and punched it in the snout. It dropped the dachshund and she grabbed him and ran.

“It was all so fast. All I could think about was my dog was going to die,” she said. “It was a stupid thing but I couldn’t help it.”

Stupid or not - well, yes, stupid. But still, this woman's brave bare-handed stand against bad animals has grabbed the world's attention: she's been contacted by radio stations and newspapers around the world for interviews.

Collins says that her unexpected fame is a bit overwhelming and she kind of wishes it would go away. Well, she needn't worry - it will soon enough, her viral celebrity eclipsed by yet more photos of cute baby animals and heartwarming tales of unlikely interspecies friendships. But for a moment, for a change, the spotlight is on a story of a bad animal getting what it deserves - let's enjoy it while we can.