Even dolphins are entitled to a defense 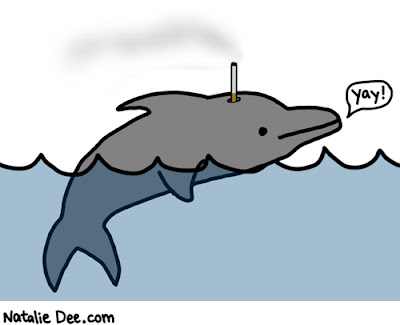 Today has been declared Save Japan Dolphins Day by people who want to stop dolphins from being fished for food in Japan. They encourage you to join them in protests at Japanese embassies around the world.

The last thing dolphins needs is more publicity. But this blog, as an almost-lone voice against dolphin worship, can't let the event pass without comment.

Defenders of dolphins are usually people with romantic notions about animals. They think that animals are better than we are, that we're the only species that commits acts of senseless violence. They're definitely not readers of this blog, where we have repeatedly documented the facts:

-They sexually harrass females of another species as well - our own.

-They kill babies - the young of harbor porpoises as well as their own,
and recent studies suggest this is done by sexually frustrated young males.

Yet people are so unable to believe that these animals are ill-intentioned that their ignorance may put them in danger. People continued swimming out to play with a dolphin called Moko in New Zealand even after many had to be rescued from his aggression by lifeguards, and when he died he was given a funeral by those who continued to defend him.

Now, none of this is meant to defend the slaughter of these animals. I'm just saying that the main reason to stop it is this: we shouldn't lower ourselves to their level.

Dolphins may be no better than we are, but we live in a civilized society, where even murderers are entitled to a defense lawyer. So protest all you want, but remember, when you watch celebrity endorsements of the claim that dolphins save lives - we never hear from the people the dolphins push AWAY from shore.

Dolphin taking a smoke break - you know they would if they could - by Natalie Dee.