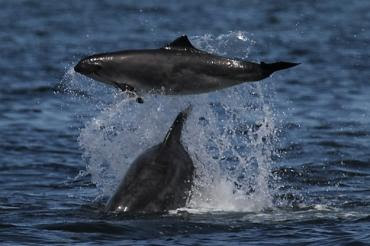 Dolphins, again. Yes, I'd love to stop beating this aquatic dead horse and spend more time covering the bad behavior of other animals. But the battle against the absurdly positive reputation of these psychopaths of the sea continues to make little or no progress. So I would be remiss in not covering a recent story in the San Francisco Chronicle about the increasing number of dolphin attacks on harbor porpoises off the coast of northern California.

These smaller marine mammals pose no threat to dolphins and reportedly don't even compete for the same food sources. But as we've already noted, they are often beaten to death by dolphins, possibly gangs of sexually frustrated young males.

Dolphins didn't used to venture as far north as San Francisco. But in the last few years they've started to move in, so the neighborhood has gone rapidly downhill for the porpoise: there have been over 50 deaths since 2005, and of course, those are only the ones we know about, where the bodies have washed up on shore. Even the scientists are calling it "porpicide."

Here are the particularly heinous details of the attack on one recent victim:

It had two badly broken jawbones, fractured ribs on both sides and a broken scapula, evidence of a sadistic attack. Worst of all, the female porpoise, which had been seen twice before and identified by researchers in Monterey Bay, was lactating when she was killed, according to marine biologists.

And yet, while somewhere out there a motherless baby starves to death, what do we see but the release of yet another ridiculously positive and heartwarming dolphin movie.

Where are the porpoise-proponent protestors picketing this piece of propaganda? Where are the international organizations exposing the slaughter? If it's not OK for us to do this kind of thing, why do dolphins get a free pass?


Peruse more pictures of porpicide in progress at The SF Chronicle. And ponder: if you don't pass this post around, are you part of the problem?