What happens when animals party too hard in the Internet age 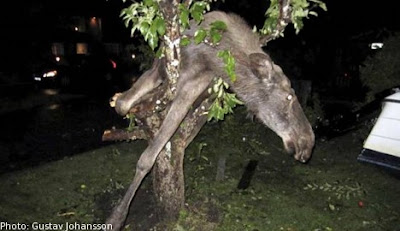 Maybe you worry about who will see those party photos on your friends' Facebook pages. Well, ours isn't the only species who may wake up to find our drunken embarrassment plastered all over the Internet:

When Per Johansson of Särö, south of Gothenburg, returned home from work on Tuesday it was dark outside and the rain was coming down hard. Suddenly Johansson heard a bellowing noise from the garden next door.

“I thought at first that someone was having a laugh. Then I went over to take a look and spotted an elk stuck in an apple tree with only one leg left on the ground,” Johansson told The Local.

Johansson took pity on the animal and called for help. He and his neighbors tried to saw the branches to make it more comfortable, but it finally required the efforts of the fire brigade to get it out of the tree. Then, rather than running away like a respectable wild creature would, it lay on the ground:

According to Johansson, it looked very much like the elk was severely drunk after eating too many fermenting apples.

Drunken elk are common in Sweden during the autumn season when there are plenty of apples lying around on the ground and hanging from branches in Swedish gardens.

While the greedy animal was reaching ever higher to reach the delicious but intoxicating fruit, it most likely stumbled into the tree, getting itself hopelessly entangled in the branches.

And from what Johansson could gather, this particular animal had been on a day-long bender.

“My neighbour recognised it as the animal that almost ran into her car earlier in the day. She was pretty sure the elk was already under the influence,“ said Johansson.

The hungover elk finally dragged itself away the next morning and is no doubt trying to hide out as photos and reports of its predicament have gone all over the world.

Of course, readers of this blog know that there is nothing unique about this case. We've seen drunk birds, fruit flies, a deer, baboons, a badger, bees, and elephants. (In fact, there is a whole chapter about drunken and other substance-abusing animals in the book. Have you ordered your copy yet?)

But let's also not forget that the last time we reported on a drunk elk in Sweden, it was no laughing matter. In 2009, a man was jailed for ten days for the murder of his wife and only released when cleared by forensic evidence: hair and saliva found on the dead woman's clothes belonged to an elk. The motive was unclear, but police cited the aggressive tendencies of elk drunk on fermented apples.

Mr. Johansson may have meant to do a good deed, but I hope he is watching his back.