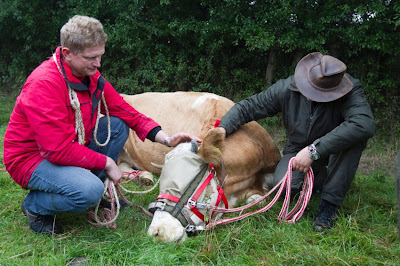 Cows have been up to all kinds of shennanigans lately, but the star of the season has been Yvonne. She escaped from a farm in Bavaria in May and spent the summer roaming the countryside, making fools out of the humans who couldn't catch her despite the latest high-tech search equipment. The situation caused conflict between groups with wildly varying approaches, from cops who wanted to shoot her to animal rights activists who thought she'd come running to them at a glimpse of one of her darling offspring.

But Germans can finally rest easy: Yvonne has been captured.

She didn't go down without a fight, of course. It took two tranquilizer shots - twice the normal dose - and even after that, rescuers struggled to get her into a transport truck. "She acted very aggressively," said a veterinarian. "She has the qualities of a Spanish Toro."

It seems like a happy ending for everyone. The farmer who spotted her got a €10,000 ($14,500) reward from a German tabloid, and Yvonne will live our her days at an animal sanctuary owned by a group that purchased her while she was on the lam, along with her sister and one of her calves.

And these cow-hugging activists - the ones who thought that appealing to her maternal nature would be enough to entice Yvonne to give up her freedom - happily say "The whole family is waiting for her."

I guess it's nice that some people have apparently had such an idyllic experience of family life. But does it really not occur to anyone that maybe that was exactly what Yvonne was trying to get away from?


See the rest of the photos of Yvonne's capture at Spiegel Online.