Our continuing coverage of Animals vs Infrastructure 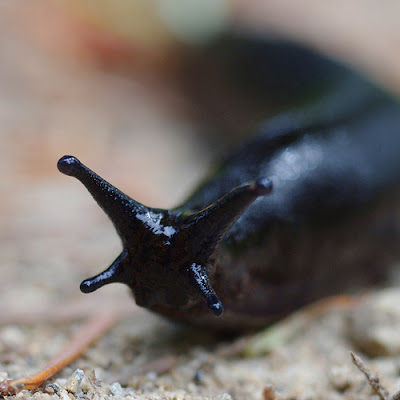 Animals continue to attack the technological underpinnings of our society, and some of the perps are creatures that we never think of as a danger. In the latest case, traffic descended into chaos in the town of Darlington in northern England when traffic lights at a major intersection went dark. Investigation revealed that a slug had crawled into the control box and short-circuited the electronics.

Green and pleasant England frequently has trouble with slugs and snails that goes beyond a nibble on the herbs and lettuce in the garden. A couple of years ago, a particularly wet summer found these slimy invertebrates interfering with the mail, climbing into mailboxes and eating the contents. It's the glue that appeals to them, according to a Royal Mail spokesman: "They are particularly keen on stamps and air mail letters. Something in the dye attracts their taste buds."

And animals interfering with electricity is common all over the world. They often cause power failures, as we've seen here (raccoon, eagle) and here (snakes) and there was a recent case in South Carolina where the culprit was a squirrel (and hey, there are quite a few in the book, too),

They can also keep you from learning about their misdeeds on this blog by cutting off your internet access, such as the crows in Tokyo that slash open fiberoptic cable for nesting material. And when crews investigated an outage in rural Idaho, “They said that bears had been rubbing against the towers,” said one victim.

Sometimes these attacks on our technology are suicide missions. Moist invertebrates and electricity are a dangerous combinations, and the slug in the traffic box incident was described as "fried." You can see a picture of the result when an individual computer user was attacked in the same way, looking a bit more like "melted," here.

But we humans seem not to recognize our own vulnerability. A local official in Darlington commented:

Unfortunately, it was dead by the time we found it, so we were unable to question it. Sadly, you just can't legislate for a rogue slug trying to take out Darlington's traffic system.

Very funny. But if he read this blog, he might not be laughing. This isn't the first time we've reported on a British kamikaze slug taking out a traffic light. And in that case, someone died in a resulting accident.

I suspect these slugs aren't giving their lives for nothing. We'll continue to keep our eye on this slimy situation.

Email ThisBlogThis!Share to TwitterShare to FacebookShare to Pinterest
Labels: slug