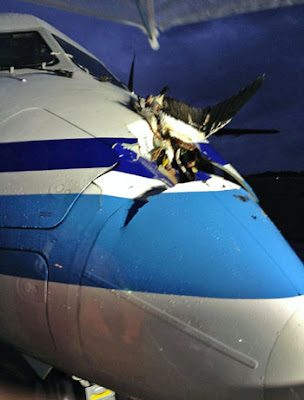 Air travel is unpleasant enough without animals getting involved. We've seen
a runway closed by turtles, a fatal crash caused by panic over a small crocodile escaping from someone's luggage, and birds dropping broken glass on a runway, just to name a few.

If you're in a cold place dreaming of travelling somewhere warm right now, perhaps a few more recent stories like these will make you feel better about staying put:

-In southern Utah, prairie dogs have become a “public safety issue” by burrowing holes in and under airport runways. A $50,000 fence has been proposed, but one legislator, citing cases where these animals have dug into caskets in cemeteries, says a fence won't be enough to keep them out.

-You're probably aware that birds can be a danger to aircraft, as in the commonly reported cases where they're sucked into engines. As the photo above shows, that's not the only possibility. That's an albatross that struck a Japan Coast Guard plane. Fortunately the plane made it to its destination safely.

-Dangerous wild animals aren't the only ones that cause problems when they get loose on a plane. A flight from Halifax to Toronto was preparing for takeoff when a cat escaped from its carrier. Good thing they decided not to proceed, because it turned out that Ripples the tabby had actually wormed his way into the cockpit wiring. Maintenance crew had to remove panels to get him out and then inspect the wiring for damage, causing a delay of almost five hours.

So I'm going to curl up on the couch with a hot chocolate and stick with looking at magazine photos of tropical places. Sure, there's still the chance my pet will set the house on fire, but I'd rather fight bad animals with my feet on solid ground.