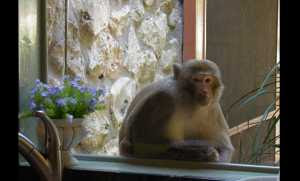 Longtime followers of this blog may recall the Tampa Bay Mystery Monkey, a macaque that's been roaming Florida since 2009. We last checked in with this primate when he was sighted taking a dip in a woman's swimming pool and stealing grapefruit from her tree. His frustrated pursuers reported that they'd hit him with bigger and bigger doses of tranq darts to no effect.

The local newspaper has maintained a web page dedicated to coverage of sightings and attempts to capture the monkey, and of course he has his own Facebook page.

But despite this widespread awareness and repeated capture attempts, he's still on the loose - and attentive readers of this blog will not be surprised at the revelation that he's had human help evading the authorities.

The Tampa Bay Times reports that for the last six months the monkey has been living in the yard of a retired couple, where he's allegedly particularly attached to their elderly mother and aged cat:

He waits on the firewood pile for his morning banana and walks ahead of the elderly woman, as if to protect her, as she walks up a long driveway to get the newspaper.

The monkey is gentle with the sickly, old cat, sometimes picking her up and moving her to a sunnier spot on the patio. He loves Oreo cookies, twisting the tops off and licking the frosting. The family has it on video.

A wildlife official was appalled to hear about the sitation. "This is dangerous and someone's going to get seriously hurt, and it's going to cause us to have to kill this animal on site," he said. "What they're doing is they're teaching him not to be cautious around people. In the end, it always ends badly."

And the monkey does seem to have a secret life to some extent, sometimes disappearing for a day or two and returning with a banana or a cookie from somewhere else.

But while the couple say they know he's a wild animal and would never touch him or let him in the house - "He's got fangs," the husband said - they've worked to gain his trust and are so protective of the monkey that they only spoke to reporters on the condition that their names and location be kept secret.

And other professional monkeyhuggers are on their side:

Dr. Agustin Fuentes, an anthropology and primate expert at the University of Notre Dame who has followed the monkey's story for two years, was thrilled to hear of his new home. He saw the latest photos, noting his coat, skin and face indicated a fairly low-stress, healthy life. This, he said, is the happy ending everyone should want for the monkey.

"He needs a family, he needs a social group, and he found it," Fuentes said. "He's never going to leave. The nice woods make him feel comfortable. There are two options: Let him find whatever joy he can get out of life or kill him. I don't see any reason to kill him."