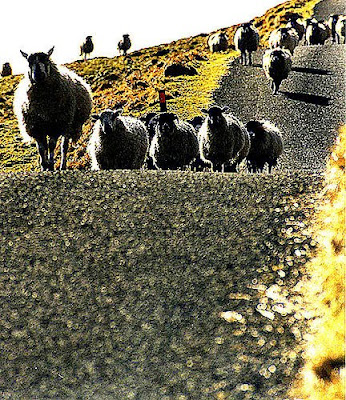 Things have been a bit dreary around the Animals Behaving Badly headquarters lately, but I can't help being perked up by a headline like this one:

You might find it implausible that these placid, wooly, not-so-bright creatures could be a danger to health, safety and the public peace, but you would be wrong:

Residents in Bream, Yorkley and Parkend are so fed up of flocks in their streets that a letter on the baaa-d behaviour is being sent to MP Mark Harper.

The problems stem from flocks of up to 50 sheep wandering the streets, fouling on pavements and bleating at night.

"Children walking to school have to walk in the road because the pavements are such a mess," Mr Kent said. "Elderly people who are not so agile are using the pavements and treading the stuff into their homes. The sheep bleat at night which keeps people awake, it's distressing a lot of people."

Surely a civilized society should not have to endure the indignities of pooping on the pavement and bleating at night. But why is this not a simple problem to solve? Why aren't they fenced in like any normal livestock?

One official blames the complexity of local government. "The problem is there's half-a-dozen layers of bureacracy. No-one will take a lead on it and do anything," he says. But any reader of this blog will recognize a familiar problem here: The reluctance of people to stand up to bad animals:

"What we are not challenging, in any way, is the right for sheep to roam free, it's an ancient tradition. But they should be roaming in the Forest, not in the villages."

A right to roam free? People: this is what happens when you give someone rights without responsibilities, no matter their species. These animals need to hold up their end of the bargain. Let these sheep start obeying the pooper-scooper laws and then we'll talk about their rights.


Ominous sheep by Flickr user eek the cat and thanks for the tip to loyal fan Jennah Ferrara.

Email ThisBlogThis!Share to TwitterShare to FacebookShare to Pinterest
Labels: sheep