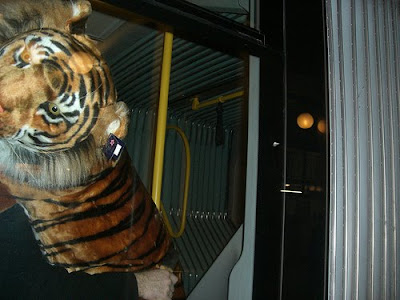 Those drive-through safari parks have always seemed like a bad idea to me. I want more than a car window between me and large wild animals. Some zoogoers in China, at least, probably agree with me now:

A bus carrying 27 people to see wild beasts at a zoo in eastern China was attacked by a group of Bengal tigers, leaving the visitors fearing for their lives for about 20 minutes while the tiger zone's gatekeeper was out for dinner.

At least five adult tigers smashed the bus with their paws, breaking its windows, and bit its tires on Saturday afternoon, according to the Paomaling Wild Animal Zoo in Jinan, capital of Shandong Province...

"One tiger's tooth was broken when biting a tire and became furious, with his mouth bleeding. It called seven or eight of his partners to surround and storm the bus," a visitor said. "The brutal tigers were trying to get in. We just screamed and cried!"

The incident ended when employees noticed the attack on security cameras and rushed to open the unattended gate.

As usual, some defended the animals, showing that this is not just a first world habit:

The zoo said the tigers were agitated and got "too excited" by some visitors' behavior.

"The tigers have entered the estrus, highly agitated by some of the visitors who deliberately provoked them," according to the announcement published by the zoo.

Now, surely there was some human responsibility here, but it belongs to the keeper who enabled this attack by going for dinner without telling anyone. Let's not blame the victims. After all, even if the visitors were tapping on the glass, in this case the tigers were basically on the OUTSIDE of the cage. All they had to do was take a deep breath and walk away.


The only kind of tiger I want to see through a bus window by Flickr user mondoagogo.

Email ThisBlogThis!Share to TwitterShare to FacebookShare to Pinterest
Labels: tiger