Out Of Place Animals Week, part 1 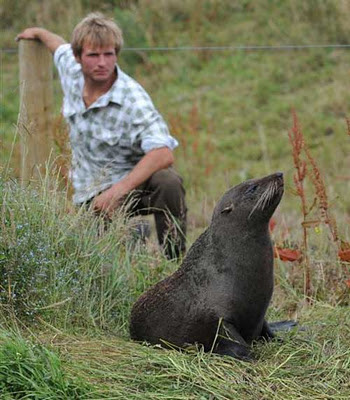 A while ago someone started a Tumblr called Animals In Places They Shouldn't Be, and I was pleased at the possibility of handing off responsibility for covering at least one kind of bad animal behavior. Unfortunately, it's not updated nearly often enough to keep up with how common this offense is. Fortunately the admirable Cats. Where They Do Not Belong is much more on the ball on the out-of-place feline beat, but to make sure that other species are not getting away unblogged, we'll spend this week catching up on some cases from the last few months.

Last week a New Zealand farmer got a call from an employee saying that his cows were "acting a bit funny." He went to take a look and found that what had disturbed them - in their paddock 15 km from the ocean - was a fur seal.

The seal had apparently swum up a shallow drainage channel, and its well-being seemed to be of more concern than that of the cows. "He barked at me a couple of times, but seemed fine apart from that," the farmer said, and the animal was monitored by conservation officials before disappearing from the farm a few days later.

We've seen other out of place seals lately, even closer to home: first on someone's porch and then, brazenly, right on a woman's sofa. But a wild animal on your sofa is nothing compared to what a woman in England experienced: she awoke in her own bed to find a fox sitting on her chest.

"I thought it was a cat at first when I felt it clawing at my face.... I just leapt from the covers and screamed, I’ve never moved so quickly." Despite the screams, it was hard to convince the animal it wasn't welcome: after being chased out of the house it tried to get back in a few minutes later.

And in the "husbands behaving badly" department, the victim also said: "Tony’s first instinct was to grab his camera rather than see if I was OK. He got a good picture of the fox in our upstairs study."