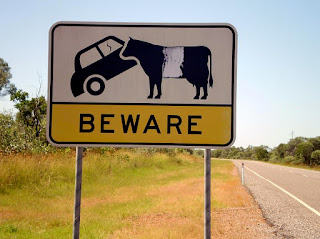 A recurring theme of this blog is that people are afraid of the wrong animals. Here, from Australia, is the sort of thing that happens when you overreact:

Emergency services were called to the home in McDougall Street shortly after 1pm after an explosion blew out the bathroom and kitchen windows and destroyed a washing machine.

A 66-year-old woman told police and fire fighters she had seen a spider on her washing machine and sprayed it with an insecticide, however, it ran under the machine.

And on the other end of the spectrum we have the problem of underreacting to real threats. It's often combined with another recurring theme here: how we can't trust the authorities to keep us safe from the animals that truly pose a risk. This is true even when their behavior is blatantly disrespectful as in this incident from Western Massachusetts:


Several cows got loose and destroyed more than three dozen flags and grave markers at a Southampton Cemetery.... where as of Wednesday afternoon, you could still notice the hoof marks in the snow. Cemetery commissioners say the animals ate plantings, damaged 40 American flags and possibly just as many bronze markers.

This is no isolated incident, and the police know it:


Police Chief David Silvernail said that while Wykowski’s cows are an “ongoing problem,” there have not been any major incidents. He estimated that police have responded to complaints about the roaming bovines three or four times since last spring.

Yet despite the fact that these cows have now escalated to the desecration of graves, this is apparently still not seen as a "major incident," and the press dismisses it as "something that comes as no surprise to those who live in this small farm town."

Let's just remind everyone: Cows are more likely to kill you than sharks. Don't downplay what may lurk behind that placid bovine exterior, because they have plenty to want revenge for.