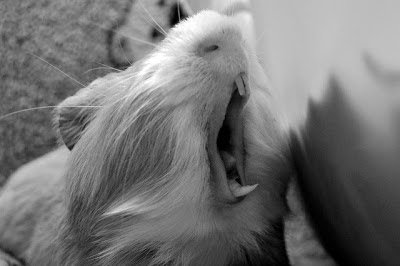 In our last post, we were reminded again that people are often afraid of the wrong animals, and I repeated the fact that you're more likely to be killed by a cow than by a shark.

But it's important not to concentrate only on fatal attacks. Animals that are unlikely to kill you can still be dangerous. An important case in point is this report from New South Wales, Australia:


Paramedics say they have been called out to treat as many guinea pig bites as they have shark attacks in NSW over summer.

Not only were there an equal number of shark and guinea pig bites that needed paramedics' attention (two each), other pets did far more damage than either: the article then goes on to report that authorites also responded to 230 dog bites, 22 attacks by cats, and 15 injuries by horse.

So remember: Don't let their cuteness and fuzziness fool you. It's the enemies closest to home that you really need to watch out for.