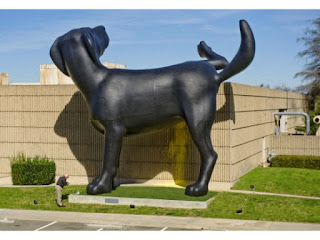 That's an art museum in Orange County, California, suffering the indignity of having a giant dog peeing on it. Part of a temporary exhibition of the work of artist Richard Jackson, the enormous canine actually contains a pump that squirts out yellow paint (and is quite anatomically correct as you can see from other photos).

The artist is clear that this work of art is meant to represent not just an innocent call of nature but an animal behaving badly:


"I understand that Newport Beach has traditionally been a conservative community. But, this is an art museum. This piece of art is making a commentary or statement. The dog is pissing on the museum."

Local dog-owners, unsurprisingly, find this amusing, and it's rapidly become a favorite place for them to take photos of their own bad dogs: 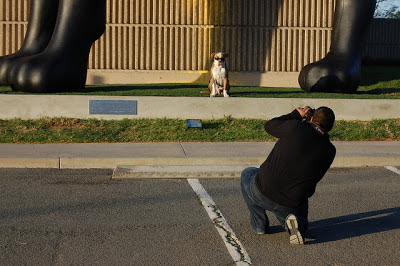 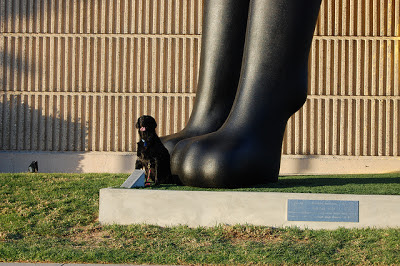 Still, at least that dog is only guilty of property damage and a bad attitude. On the East Coast we've got a much more serious case of bad canines being supported by the authorities. Here's a recent headline in the Washington Post:


Is a rabid fox ‘a really good sign’ for the city?

The obvious answer to this question is not the one given by the "experts" in this article:


A rabid fox bit a young mother on the leg this week as she crossed a road in Northwest Washington’s Rock Creek Park.

Tuesday’s attack was bad news for the fox, which was later captured by D.C. animal control officers and put down, and for the victim, who has to get a series of rabies shots.

But it was good news to city officials, who saw it as confirmation that the District’s environment is improving, making it more inviting to wildlife, even an occasional sick one.

“It’s actually a really good sign,” maintained Najma Roberts, a spokeswoman for the D.C. Department of Health, which oversees animal control. “When you look at areas that are filled with pollution — not a lot of trees and grass, and garbage everywhere — there is less wildlife.”

This "expert" seems to be unaware that having less wildlife is the whole point of living in cities. Our species invented cities precisely because we realized that it is safer to live with our own garbage than among rabid predators.

All I can do is once again ask the eternal question: whose side are these people on??