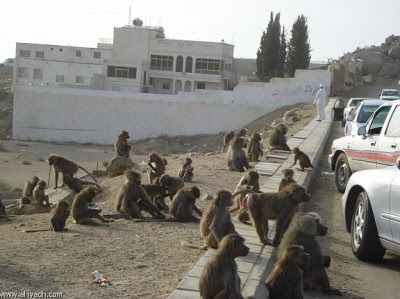 A selection of recent efforts in traditional types of bad animal behavior:


-In Florida, a dog shot his owner, and as usual, the police obviously have not read this blog or the book I helpfully wrote with the subtitle "Cheating Chimps, Dogs with Guns, and Other Beastly True Tales:"

He was traveling in his truck when his dog kicked a gun on the truck's floor, resulting in him being shot in the leg, according to a report.

Sebring Police Cmdr. Steve Carr said police did not arrest the dog or detain the animal, pending the investigation. He said he has never heard of a case like this.

-We've seen numerous reports of the marauding baboons of South Africa that break into cars and even people's homes. Now the same thing is happening in Saudi Arabia:


They typically arrive before dawn, in groups of 10 to 20 baboons. First, they raid crops in the fields around the village, then they tear open the trash bags and even try to break into houses to steal food. Last week, they caused a panic at a girls’ school they attacked early in the morning. They managed to steal cookies in the backpacks of the students.

My neighbor recently had half of his grape crop destroyed. He set up scarecrows to frighten the baboons off, to no avail.

A dozen years ago, these monkeys never dared to enter into cities because they were too afraid of humans. But along the roads and in small towns, people have gotten into the habit of feeding them. This practice encouraged monkeys to venture into inhabited areas. We haven’t gotten much help from the authorities to deal with this problem.

-A herd of deer followed in the grand tradition of animals crashing into places of business, invading a shopping center in Indiana:


“All of a sudden we just hear a lot of really loud noises and we looked outside and there was like at least 10 deer just running up and down the strip,” Katie Hall, hairstylist in the plaza, says.

“It was crazy. They were running into all the windows and they were up against our door. And they went over to Fashion Bug, they busted that window,” Hall says.

A third deer made its way through a Dollar Tree, scaring an employee.

“She was crying her eyes out and she said they-it busted down about 10 shelves. It was just going crazy,” Hall says.

Some who ought to know better thought this was a laughing matter:


Harrison County firefighters stayed busy, cleaning up and scraping away broken glass. However, most of their work went into cracking joke about the herd of deer that wreaked havoc on a store where everything’s a dollar.

“Gotta new name for the store: ‘Everything’s a Buck,’” one of the firefighters says.

Photo of baboons lurking outside a Saudi Arabian school, read more about it at the link and tell us about it if you can read Arabic.