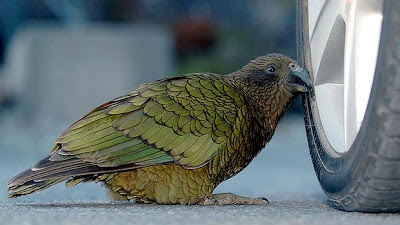 As Alondra Figuroa, 19, unloaded her grandmother's wheelchair from the back of the family's 2000 Ford Explorer, she noticed barking, police said. She saw a stray dog in the backseat of the vehicle, and it was "devouring" the pizza, police said.

She tried to scare the dog away, but it became aggressive, police said. When police arrived, the dog was still inside the car, eating the pizza and aggressively defending his food.

The dog was wearing a collar with the words "Don't Mess with My Food" inscribed on it.


A thief stole hundreds of dollars from Peter Leach's campervan, but left no fingerprints - because the thief has no fingers.

Mr Leach, a visitor from Glasgow, Scotland, stopped at Arthur's Pass on Wednesday to take in the views at a rest area along State Highway 73. He left the windows down as he snapped photos of the scenery, including one of an unusual bird on the ground near his vehicle.

"A Canadian couple walked by and said: 'We've just seen that bird take something out of your campervan'," Mr Leach laughed.

Finally, if you are having a tough Monday, at least you probably don't have to worry about this workplace hazard: