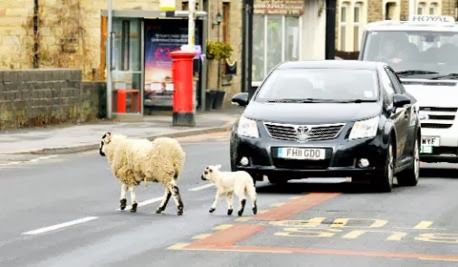 You probably think of sheep as innocent and wooly and maybe not really smart enough to make real trouble. If so, you don't read this blog carefully enough. We've seen sheep desecrating a graveyard and rampaging through a home. A couple years ago we even saw what was basically a gang of wandering sheep hooligans - reportedly "fouling on pavements and bleating at night" - and now we've got another one.

These incidents all happened in England, where they either can't or don't want to keep their sheep under control, no matter the risk even to innocent children. In a town in Lancashire County, students at one primary school can't even go outside to play anymore, says the headmaster:

Children at Balladen Primary School are being kept indoors because of sheep invading the grounds.

He said: “I don’t think there’s been a day for some time when we haven’t seen them and the sheep dirt is everywhere. It gets on children’s shoes, it gets into school and we’ve had to stop children playing out because of it.

“We had six sheep one morning and three the day before so they’re becoming a real nuisance. They frighten the children.”

Residents also complain of damage to their gardens, and as in the previously reported case, of various levels of authority saying that the sheep problem is not their responsibility.

These sheep also interfere with traffic, as in the photograph above. The police say they're on it, and the county council claim they'll look into how to keep the sheep off the school grounds, but I don't have a lot of hope for quick action.  That photo was taken almost a year earlier, and since then it's clearly only gotten worse.

Oh, and, get this: the headmaster says there have been stray sheep around for 14 years. Longer than the current pupils have been alive.

Why are Brits so frozen with inaction in the face of these wooly desperados? What is it about sheep that gives them this power? I don't know, but we'll be following these stories closely.