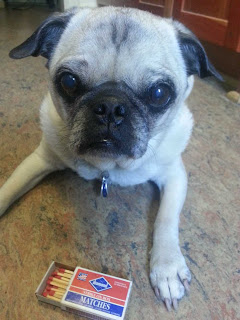 Sometimes I think it's time to retire the arsonist dog to a Bad Animal Hall of Fame. Dogs start fires by turning on the stove so often (see here, here, here, and here), as well as in other more imaginative ways,  there's even a National Pet Fire Safety Day to warn people that pets set over a thousand fires a year in the US. The blog has covered this so many times that I've gotten exhausted looking for relevant photos and you're getting the pug with matches yet again.

So you'd think this couldn't be news to anyone, but then it happens again and the owner says:


"I laughed at first. You never think this sort of thing will happen to you and you don’t expect your dog to do it. How many people can say their dog nearly burnt their house down?"

Sigh. LOTS of them, but obviously we still need each cautionary tale, so here it is: Martey, a Lab in England, was lucky that his dog walker came just in time. She found the kitchen full of smoke because he'd turned on the stove and it had set fire to everything around it. As usual, there was some food on the back of the stove and the dog had been trying to get at it. The result:


"The fire has totally destroyed the kitchen and caused smoke damage to the rest of the house." It is not known how much it will cost to repair the kitchen but Megan says all the units will need to be replaced.

They tell you to do your research before getting a dog - why don't the breed books ever tell you that small dogs that can't reach the stove are safer to own ?