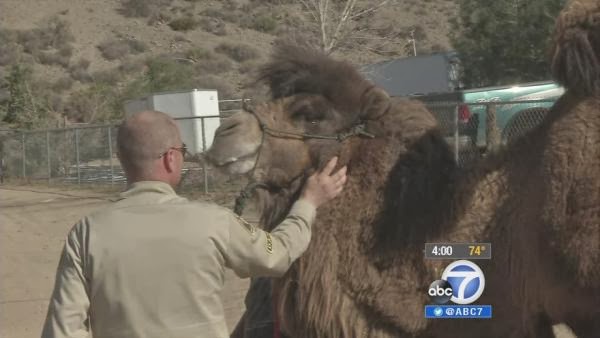 Last week a camel escaped from a property north of Los Angeles and sent a 72-year-old man to the hospital. Steve Brefka tried to capture the animal and return it home, as he says fellow animal-owning neighbors in the area often do.

His reward was being kicked, knocked down, and bitten till he had to hide under a car till help arrived.  He told reporters:


"He was stomping me and biting me, and getting on his knees on top of my chest," said Brefka. The 72-year-old said the camel's mouth was entirely over his head.

You might think the man's loved ones would be furious - unless you're a reader of this blog and know how animals cloud people's minds. In fact the victim's daughter helped authorities corral the animal, and gave a number of interviews, and it's seriously unclear whose side she is on. She said she was able to help because the camel knows her, since she often gives it treats – and she made excuses at great length for the animal, saying how frightened it must have been. "I think the trapped him and he was scared," she said. "Any animal when you're nervous is going to act out when you trap them."

Reportedly the owner doesn't have the right permit to own the camel and other exotic animals on the property, so somebody might get punished. But I expect that as usual the camel will get off scot-free – and if he's returned to the property, I have no doubt that the victim's daughter will be back to feed him more treats.

Finally, this ought to be the sort of story that makes my blogging heart leap, but there is one element that is seriously disappointing: The camel is said to have attacked cars, and there isn't a single photo. Where were those people's cell phones? Where are my photos of a car-attacking camel??