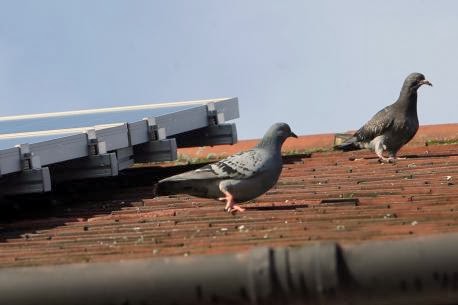 Last week we saw what was possibly a bird-fish conspiracy against aircraft - frightening, but at least it's something you could avoid by simply never leaving the house. But that won't help, because as these two stories show, birds can get at you where you live:

-Try to help the environment and here's how birds will thank you: An English couple says they're living through hell because dozens of pigeons are nesting under the solar panels on their roof:


Stephen Fishenden and wife Linda, 65, of Wittenham Way in Chingford, say they have lived through “hell” since the birds began to seek shelter beneath the energy-saving panels, which were fitted by a contractor working for council homes manager Ascham Homes. Mr Fishenden first complained to Ascham Homes in March last year about the “horrendous” noise keeping them awake at night and his wife’s deteriorating health.

The 65 year-old said: "I specifically asked at the time if we would have any problems with birds and was reassured they would not be a problem.

"It has been hell and has made my wife ill. She’s asthmatic and is having to use her pump more regularly. We are both constantly awake and have had hundreds of sleepless nights. It is particularly horrendous in the morning."

-And if you need another reason to quit smoking, this one is for the birds: A London fire has been blamed by investigators on a bird with a butt:


"When we got up into the roof, we were baffled as there were no obvious ignition sources. No-one had been up to there for a long time and there were no electrics that could have sparked a blaze.

"Neighbours told us they often saw birds flying in and out of a hole in the roof. We believe that one of the birds picked up a cigarette butt that was still smouldering and dropped it into the nest, causing it to catch fire and set the roof alight."