Combination of bad animals close down school for a day 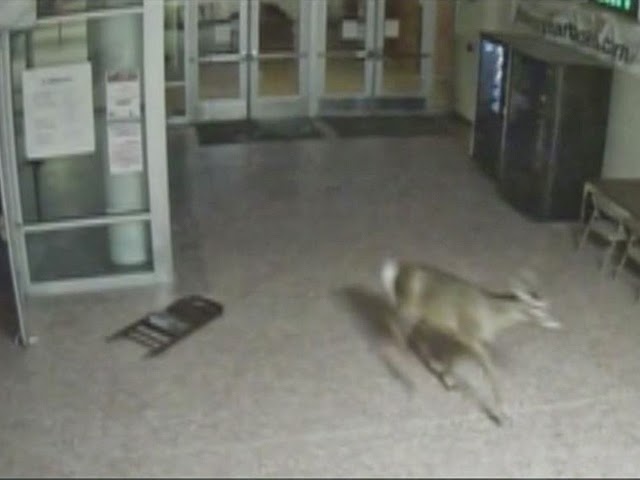 Just when I think I've seen everything... Hoofstock crashing into school buildings is nothing new. Dogs attacking other animals is certainly nothing new. Animals interfering with children getting an education -  we've seen that more than once.

But this is a combination that impresses even me: in Anne Arundel County, Maryland, three deer smashed into a school building, two dogs followed, and the result was mayhem:


When the officers arrived they found chairs knocked over in the lobby and broken glass at a door next to the cafeteria. They also found a deer on the floor being attacked by a German shepherd.

When officers passed another doorway, they found a second deer “sitting on the floor in distress.” Police said the animal was suffering from “apparent bite marks.”

Officers found another dog, and another deer trapped in a hallway that was so badly injured that it died. The other two deer were later euthanized due to the extend of their injuries.

The dogs were captured, and their owners were located, but they're reported to be in the custody of animal control. No word on possible charges, but damage is estimated at up to $5000 and the two schools sharing the building lost a day of classes. A spokesperson said:


“The extent of the cleanup that was necessary was such that we could not open either school. It was a pretty gory scene.”