Elephants vs Parked Cars in Missouri 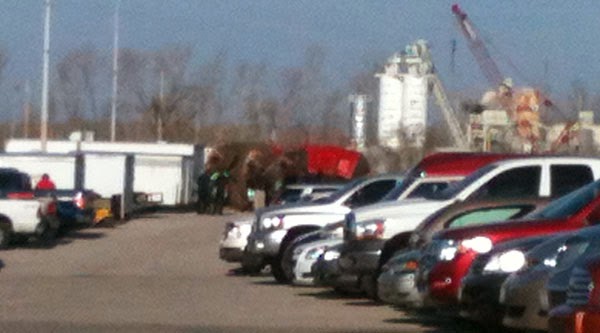 Elephant rampages in natural elephant habitat are so common that they're barely worth a mention on this blog. It's a bit different when they break out of a Midwestern circus and trash cars in a parking lot.


"Things started shaking, When I looked up I saw three elephants coming toward us," Sally Schmiz, a witness to the event, said. "These huge elephants literally went through these huge RVs. Then they went through two trucks breaking mirrors off, and panels off and breaking the windows."

Another witness overheard staff trying to recapture the pachyderms: a trainer reportedly yelled "we need pretzels, anything, just get me some food."

As I was always taught in my zoo jobs, keeping the public away from an escaped animal is a high priority, and the circus staff apparently did this effectively. The responsible thing to do, yes, but with the sad result that the photo above is the best I can find of the incident in progress.

The animals were reportedly brought under control after about 45 minutes and given the rest of the day off. Later coverage is headlined "Elephant trainers still don't know what caused elephant escape." But I note that the elephants in question had the job of letting children ride them, and while I am not making excuses, wouldn't that send you on a rampage too?