When cats - and the media - attack 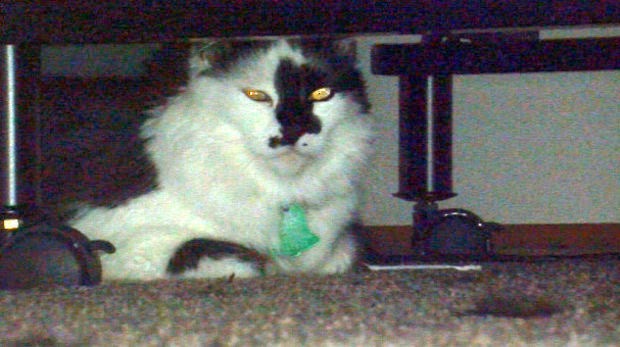 No doubt you've already heard the story of the Portland couple who called 911 last week because their 22-pound cat had them trapped in their bedroom. I say "no doubt" because the local newspaper at this point has a collection of Headlines from Around the World. But in case you haven't, here's basically how it went down:


Dispatchers stayed on the phone while the couple locked themselves — along with their baby and the family dog — in a bedroom.

Owner Lee Palmer told dispatchers the 4-year-old male cat "has a history of violence," and had scratched his 7-month old son in the forehead.

Palmer said he tried to get the cat off his son: "I kicked the cat in the rear, and it has gone over the edge. He's trying to attack us -- he's very hostile. He's at our door; he's charging us."

The dispatcher asked her supervisor if it was OK to send police on such an unusual call. It was. Meanwhile, on the 911 tape, the cat can be heard screaming in the background.

Police snared the cat and that might have been the end of it, except... the internet, and cats. So the couple's next problem was finding themselves in the middle of a media maelstrom.


On Monday, police issued a press release detailing the rescue. The story, too, went ballistic, attracting worldwide attention and keeping both Palmer and Barker’s cellphones buzzing and ringing into Tuesday.

In addition to the media attention, Baker and Palmer have been fielding calls from people who want to adopt Lux and others offering psychological counseling for the cat. Barker and Palmer are also expecting a call from the producers of the Animal Planet show “My Cat from Hell.”

The couple say that they don't want to get rid of the cat - which is what the poor folks would have to say when they're in the spotlight like this. And sure, they've been offered help.... but before they meet that TV star cat guy, I hope they realize whose side he's on. In an interview, while admitting he hasn't yet met the cat in question, he makes all kind of excuses: Maybe it's sick, and "he also suggests asking if there have been any changes in the home environment that might have led up to the attack."

And yes, to be fair, the scratch occurred after the baby pulled the cat's tail. But still, he considers every possibility except one: Maybe this cat is just plain bad.