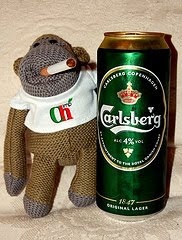 Zhora, a chimp in Russia, has been sent to rehab to treat his smoking and drinking habit. Some reports imply that this tragedy is all the fault of zoo visitors who, despite the pleas of management and a barrier of three fences, managed to supply Zhora with booze and cigarettes. But as Reuters quotes the zoo director:

"The beer and cigarettes were ruining him. He would pester passers-by for booze."

Let's be clear on who's really to blame here: you can hand a chimp a beer, but you can't make him drink.

And in other news from man's "best friend," no comment is necessary on this report headlined German Man Betrayed to Police by Own Pet Dog:

When officers called at his flat in Euskirchen, near Cologne, the door was opened by an acquaintance of the missing man who was holding the dog.

The acquaintance said he did not know where the owner was.

But when the dog was set down, it led police to the cupboard, where it stood expectantly with its tail wagging.

Officers who opened the cupboard, which was just a metre (3ft 3in) high and 80cm (2ft 6in) wide, found the fugitive "hunched up inside".

In case you're looking for a breed that would be a better partner in crime, the dog was reported to be a Jack Russell.