If animals want rights, they can pay their own bills too 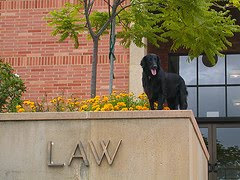 This blog is constantly demonstrating that animals treat people badly. But it in no way advocates that we treat them likewise in return. If nothing else, we wouldn't want to lower ourselves to their level.

We're not even going to nitpick when laws protecting animals come close to mollycoddling, such as the Swiss laws that forbid flushing goldfish down the toilet and require that guinea pigs and canaries be kept with roommates.

But we're relieved to report that yesterday, the Swiss voted against a proposed law that would have required the government to provide free lawyers to represent animals in court.

The lawyer widely quoted in articles leading up to the vote is famed for representing a dead fish in a case arguing that it was cruel for a fisherman to spend ten minutes attempting to land it. This blog was almost on the fish's side till we read that it had committed the unforgivable sin of having more Facebook friends than we do (reportedly over 6,000.)

We're not saying that animals don't deserve legal representation. We're just saying that if animals are going to start taking jobs that people could otherwise have (as we've seen most recently here and here), then, let them pay for their lawyers with their own damn money like the rest of us have to.

Email ThisBlogThis!Share to TwitterShare to FacebookShare to Pinterest
Labels: law