"We're lucky these things aren't the size of ravens." 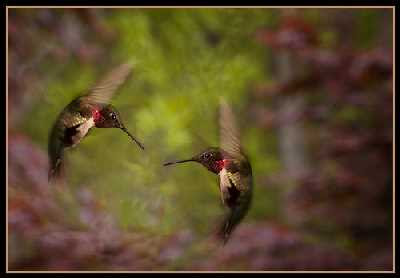 This blog has often observed that the cuter we think an animal is, the worse the truth about it (I'm looking at you, dolphins).

If you don't believe me, maybe you'll believe the excellent and well known wildlife writer Richard Conniff when he writes about hummingbirds:

"These creatures have a following like mythical beasts," said one of the guides, a little ruefully. "There are people who don't care anything about birds, or other wildlife or nature, but they love hummingbirds. We had one woman tell us: "I just love hummingbirds and unicorns." And I don't think she drew any distinction between the two."

The guide's name was Tom Wood. He was from the Southeastern Arizona Bird Conservatory. "People come in," he continued, "and they say, "They're so tiny, and they're so sweet," and we'll say, "Well, they are tiny." Wood trained his binoculars on a feeder. The glittering fragments of rainbow were at that moment swatting and screaming at one another in a relentless bid to get to the head of the line. "They're fighter pilots in small bodies. We've seen a bird knock another hummingbird out of the air and stab it with its bill. People still don't believe it. They think they're little fairies." He shrugged. "We're probably lucky these things aren't the size of ravens, or it would not be safe to walk in the woods."

A bit later in the article in his book Swimming with the Piranhas at Feeding Time is the following:

A scientific paper about the rufous hummingbird includes this endearing notation: "SOCIAL BEHAVIOR: None. Individual survival seems only concern."

This should be enough for anyone, but if it's not, how about the page on hummingbird behavior here, which explains:

When hummingbirds fight, they puff themselves up to look as large as possible. They will spread their wings and tail feathers out as large as possible, and they will use their beaks and claws as weapons. They will chirp warnings as they head toward each other. Hummingbirds have been known to body slam each other in mid air and even lock their bills together while spinning in a circle until they hit the ground.

Consider that that was written by people who actually like hummingbirds, enough to write a whole website about them. It goes on to tell a story about how hummingbirds are so aggressive toward other hummingbirds that they repeatedly attacked a plaque of fake decorative hummingbirds.

And in case that after all that, you still want to put out feeders to actually attract these creatures, they advise as follows:

To avoid hummingbirds from causing too much injury, put out a lot of hummingbird feeders either spaced far apart or all bunched together so there is no way one hummingbird can guard them all. Don't bother to try and stop them from fighting. It's best to just leave them alone and let them work it out. We have a rule on the top deck of the World of Hummingbirds: Hummingbird Farm of "no body-slamming". Whenever the hummingbirds start to body-slam each other, we yell, "Hey". Now they just do it when they think no one is looking.