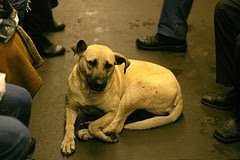 We reported recently on a cat that took the ferry to Spain from England. Concern that this was a symptom of a bigger problem was confirmed by our crack bad behavior research team, which dug up two stories about dogs that take the subway in Moscow. One, in the Financial Times, quotes extensively from a biologist that studies the packs of stray dogs living in the city:

Neuronov says there are some 500 strays that live in the metro stations, especially during the colder months, but only about 20 have learned how to ride the trains. This happened gradually, first as a way to broaden their territory. Later, it became a way of life. “Why should they go by foot if they can move around by public transport?” he asks.

Regular readers of this blog won't be surprised that these strays have their human enablers:

The metro dog also has uncannily good instincts about people, happily greeting kindly passers by, but slinking down the furthest escalator to avoid the intolerant older women who oversee the metro’s electronic turnstiles. “Right outside this metro,” says Neuronov, gesturing toward Frunzenskaya station, a short distance from the park where we were speaking, “a black dog sleeps on a mat. He’s called Malish. And this is what I saw one day: a bowl of freshly ground beef set before him, and slowly, and ever so lazily, he scooped it up with his tongue while lying down.”

Dogs aren't the only lazy animals who've gotten the idea that human transportation is a good deal. We've previously seen a bird trying to hitch a ride on a plane, and now there's also this video of a pigeon taking the subway in Toronto.

These animals might be interested to know what happened to a cat in England who took the same bus every day for four years: he was killed by a hit and run driver while crossing the road to get to the bus stop. His owner was quoted in the Daily Mail:

She said: 'Casper was quite quick for his age but I was trying to stop him from riding the bus so much.

'He had no road sense whatsoever but he loved people.

Sad, but instructive. As we humans well know, taking advantage of our transportation technology has its downsides. Maybe animals - who can already run, climb, swim and fly better than we can - should stick to what they're good at.

Moving on: this video from Japan, always on the forefront of treating animals humanly, shows a family that sends its pet penguin to the grocery store on its own. We have to grant that at least this penguin is pulling its weight in the household more than most animals do.

The Japanese are probably also not helping matters by believing that some of their cats can actually speak.

A final quick addition to a topic we have been following: add cigarettes and coffee to the list of substances that bees like to abuse, which already included bees alcohol and cocaine. Scientists in Israel found that they also prefer nectar that is spiked with caffeine and nicotine.


Dog on the Moscow metro by Flickr user Adam Baker.