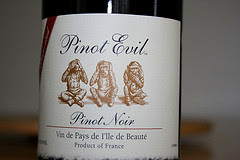 The folks in Florida that we read about last time aren't the only ones having trouble with their resident primates.

In South Africa, baboons are attacking the wine industry, stealing tens of thousands of dollars worth of grapes ready to harvest - and it's only the best for these particular primates:

Growers say the picky primates are partial to sweet pinot noir grapes, adding to the winemakers' woe: Pinot noir sells for more than the average merlot or cabernet sauvignon.

"They choose the nicest bunches, and you will see the ones they leave on the ground. If you taste them, they are sour," said Francois van Vuuren, farm manager at La Terra de Luc vineyards, 50 miles east of Cape Town. "They eat the sweetest ones and leave the rest."

Not just thieves, they're also drunkards:

Sometimes the baboons even get an alcohol kick — by feasting on discarded grape skins that have fermented in the sun. After gobbling up the skins, the animals stumble around before sleeping it off in a shady spot.

Vineyard owners try to drive away the monkeys with rubber snakes and annoying noise, which naturally brings out the monkeyhuggers:

"The poor baboons are driven to distraction," said O'Riain, who works in the university's Baboon Research Unit.

Elsewhere, a more personal attack: a disabled veteran was savaged by his service monkey:

Hamerick says it started when he accidentally stepped on Noah's hand or foot. The capuchin snapped back violently, locking down on Hamerick's thumb.

"I just started pulling. Didn't give a d*** if I pulled my thumb off at the time - if there was anything I could do to stop the fight. I needed to stop it."

But the fight didn't end there - Noah kept swinging and biting. Hamerick says it was worse than war, even though he lost an eye in Vietnam.

"I got hit all over my body. That was a breeze compared to my little fight with him. Cut the vein, tore ligaments out of my wrists. I'm pumping blood all over..."

"I'm looking around and saying 'well, never thought I'd go out this way...I'm sitting there thinking I'm going to die."

So what's the victim's conclusion after this vicious attack by an animal he called his "best friend"? If you've been reading this blog you won't be surprised:

Label from some winemakers that believe the monkey lies, from Flickr user rbeiber.