The war between dogs and chickens 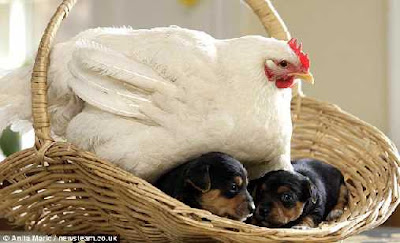 You'd think dogs would feel secure in their place as humanity's favorite pet. (Yes, statistically there are more cats, but that's because there are many multiple cat households. However, more people own dogs.)

And you'd think there's nothing unusual about killing a chicken, as far as bad dog behavior goes. Even a recent story like the one about the hen that adopted a litter of rottweiler puppies is unlikely to make a fundamental change in the dynamic between the two species.

But keep reading the story headlined "Plucky the chicken dies after dog attack" and the plot seems to thicken:

The loss has hit the Hawkes family hard. Plucky came into their lives a year and a half ago when Sharan Hawkes’s husband, John, found the chicken wandering around in front of their home.

She became the family pet, living in a coop in the backyard of the Dix Street home.

And the Hawkes family launched an effort to change Waltham’s zoning regulations to allow homeowners to keep one chicken as a pet.

Chicken-keeping is reportedly become more and more popular. Is it possible that dogs feel threatened by the possibility that our pet-owning choices could be broadened? That perhaps they realize that chickens not only don't get hair on the sofa or jump up and slobber on guests, but they even contribute something to the household in the way of foodstuffs?

If that was the underlying motivation for this heinous act, the Hawkes family of Waltham vows not to let it succeed:

If the measure does pass, the family intends to buy another pet chicken.

"In Plucky’s name we’re going to continue this," she said.

Hen mom who should not expect any gratitude from the Daily Mail.

Email ThisBlogThis!Share to TwitterShare to FacebookShare to Pinterest
Labels: chicken, dogs, the dog ate my homework