Monkey on the lam 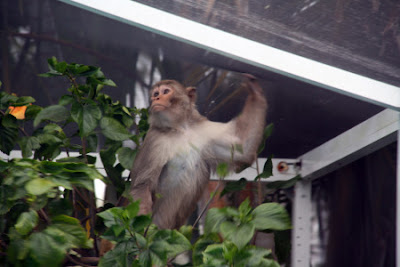 A famous roving primate in Florida was spotted again: he broke into a woman's enclosed swimming pool, took a dip, and stole some grapefruit from her backyard trees on his way out.

For over a year the rhesus macaque has evaded capture, even though pursuers have managed to hit it with tranquilizer darts, which are worse than useless, according to one source involved in the pursuit:

"The drugs just don't seem to affect him for whatever reason," said Yates. "We've increased the dosage every time that we've shot him. What we're really doing is turning him into a drug addict."

(As if being a thief and an addict isn't enough, the monkey's other offense is being another of those animals who have more Facebook friends than I do.)

We wish the Florida authorities luck in their continuing efforts, and agree with Stephen Colbert, who's been persistent in keeping this story before the public: "I believe animals should be in their natural habitat: behind bars."

Monkey in the pool room by break-in victim Renee Barth from the St. Petersburg Times.