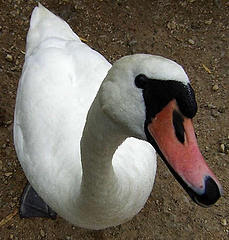 Where's the fellow feeling among birds? They clearly feel no need to be nicer to other birds than to anyone else. A couple of weeks ago we saw a seagull that dropped a budgie onto the head of a pedestrian. That's nothing compared to the rampages of a swan nicknamed "Hannibal," who has killed at least fifteen other swans to defend his territory in a pond in Wales.

You'd think just beating intruders up and driving them away would be enough, but Hannibal not only takes it as far as murder - he even involves the wife and children, as a local volunteer rescuer reports:

"He holds their heads under the water until they drown or he beats them to a pulp with his wings.

"Mrs Hannibal blocks off the escape routes while he attacks them and then they take the baby to view the kill while mum and dad do a triumphant, wings-up, celebration."

The wildlife rescuer has applied for a permit to remove Hannibal from the pond, but she may be part of the problem. Despite that fact that she is caring for three victims that managed to escape this monster, she is not advocating his immediate destruction - she's open to the possibility that he can be rehabilitated:

"He will be here until we can determine if he has a solvable problem. If it is treatable he will be relocated, perhaps to a private lake."

Don't mess with that swan by Flickr user pigpogm.