This is your mind on bad animals 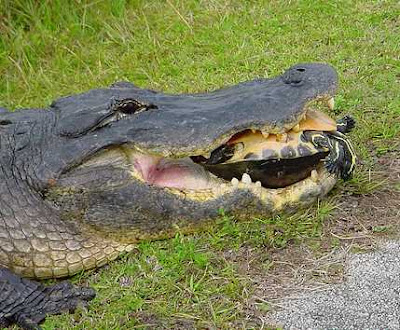 Dearest readers, perhaps writing this blog, being constantly steeped in the lowest lows of animal behavior, has made me into a bad person. But all I can add to the following story from Florida is: LOL.

A horrified 8-year-old boy watched as an alligator ate the pet turtle he'd just donated to a Panhandle aquarium.

Brenda Guthrie and her 8-year-old son Colton witnessed Tomalina’s death as the red-eared slider disappeared into the alligator’s jaws at the Gulfarium. When the two looked away from the sight, she said they could hear the crunching of the turtle’s shell.

“He was jumping up and down screaming,” Guthrie said of her son’s reaction. “He was shouting, ‘Oh no alligator, let it go.’”

Guthrie said that they decided to donate Tomalina after the turtle outgrew its aquarium. They chose the Gulfarium so that Colton could come back and visit the turtle.

They brought it there Thursday afternoon and watched as workers put the slider into the alligator exhibit, where two other red-eared sliders already live.

Gulfarium officials said that the alligator, Gracie, had just been hand-fed and that the gators normally don’t express interest in the turtles.

“It’s horrible for a little kid to have to see that,” said General Manager Don Abrams. “That’s not unusual to put sliders in the same exhibit. (The alligators) have never eaten a turtle in the exhibit before.

“It’s just Murphy’s law that nature would take over right then,” he added.

Email ThisBlogThis!Share to TwitterShare to FacebookShare to Pinterest
Labels: alligator