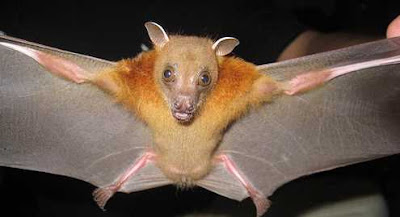 Last week, we saw that children's books - even when based on a "true" story - can't be trusted to provide our youth with the truth about animals. Today, we find the same lack of context in a branch of literature that ought to be more reliable.

This blog was was initially thrilled at the news that an Ig Nobel Prize was awarded to the researchers who discovered that fruit bats have oral sex and copulate at the same time, which we reported on here. Finally, we thought, this sort of thing is getting the publicity it deserves.

However, our pleasure immediately turned to disappointment when we read one of the scientists, Gareth Jones, quoted in the eminent Guardian as saying:

This scientist has clearly not done his homework. Never mind combing the periodical indexes - with little effort, he could have simply read the book mentioned in our last post. Biological Exuberance by Bruce Bagemihl, in the course of seven hundred pages worth of evidence for homosexual behavior in the animal kingdom, also documents many other sorts of, to put it somewhat tastefully, "non-procreative" sexual interactions.

Consulting the index of this tome, under "oral stimulation (heterosexual)," there are entries for twenty different kinds of animals, and under "(homosexual)", twenty-five.

In fact, this act has been documented in all sorts of creatures, including but not limited to primates, cheetahs, hedgehogs, and various fruit bats. Not only don't some care what sex their partner is - for example, in walruses and manatees, pairs of males do it together - also, some don't even care what species - caribou and moose do it to each other.

Bagemihl's book was published in 1999, and it seems likely that in the last ten years, many other naturalists have observed such behavior. I'd go check some journal indexes if I wasn't feeling kind of sick to my stomach already (do you have any idea what it is like to read seven hundred pages of this sort of thing?). But this is exactly what our much better paid, fruit-bat-voyeur scientist friends should have done before making public claims about discovering a first.

When a respectable academic makes a claim "to my knowledge," we expect better that this. How are we going to make progress in exposing bad animal behavior if scientists do their background research so poorly?