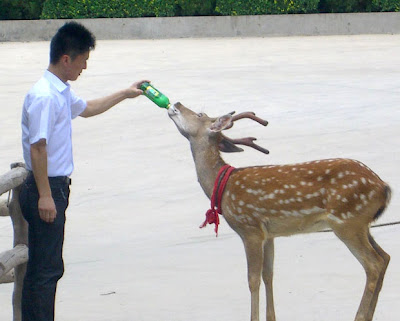 It's been far too long since we called attention to substance abuse in the animal kingdom. Setting a particularly bad example is a chimp in China with a smoking habit. Yes, he died recently, but:

Zoo spokesman Qondile Khedama said Charlie had become an institution, entertaining thousands of visitors every year with his antics.

For years, zookeepers had been trying to get the chimp to kick the habit, and they discouraged visitors from giving him cigarettes.

But Mr Khedama said he did not believe the addiction had ended Charlie's life prematurely, as he had lived around 10 years longer than the average chimp.

And in Austria, some zoo rhinos were directly responsible for enabling one man's drug habit:

An Austrian zoo has fired a zookeeper after discovering that he had been secretly growing a cannabis plantation in the rhinoceros enclosure he was in charge of. It was a clever scheme because the 59-year-old man had exclusive access to the enclosure at Salzburg Zoo, and the presence of the notoriously irritable one-ton beasts was likely to deter the curious.

But perhaps the most disturbing case reported recently is that of a deer at a resort in China. A few months ago, a waitress offered the animal a taste of some beer, and it was the first step on a descent into alcoholism:

Since then, says Zhang, whenever there is any leftover beer she takes it to feed to the deer.

"It has a growing addiction to beer. To begin with it was half a bottle but now it is several big bottles in a row. Her daily feed is around two bottles of beer."

Zhang adds: "I don't know what her maximum appetite for beers is though we once tried giving her four bottles of beer and she drank them all."

Elsewhere the restaurant's chef is quoted:

"It drinks beer quite often. It does not drink water any more, it only drinks beer."

Some say that drug abusers hurt only themselves, but when people foolishly believe that animals are cute and noble, we run the risk of their behavior being used as a role model, especially by innocent youth. What are our children to think when they see Bambi guzzling beer?