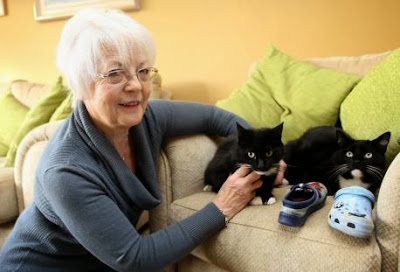 Sometimes I think we don't need to hear about another cat - especially another English cat - who steals odd things from the neighbors. But this one is unique: it's a team.

Eric and Ernie are two cat brothers in Essex, England, who have been a criminal duo since being adopted as kittens about four years ago. They've brought home about a hundred items and specialize in apparel. They particularly like shoes, says their owner:


"They will bring one home one day, and the next day the matching shoe will arrive," she said.

"Somewhere there is a man watching television with cold feet because we have both of his slippers, which say, 'Keep quiet, I'm watching football', on the front."

They were also thwarted in one big attempt:


“Our neighbour has two sons and her husband saw a Cub Scout uniform being dragged over the fence, but managed to retrieve it."

Their owner has tried to get them to turn their skills to something more valuable, but to no avail:


Mrs Boddy said she had shown both cats £5 and £10 notes in the hope they might bring home "something other than a mangled item of clothing."

If you still haven't had enough cat burglars, check out this roundup from the BBC that includes one with his own Facebook and Twitter.