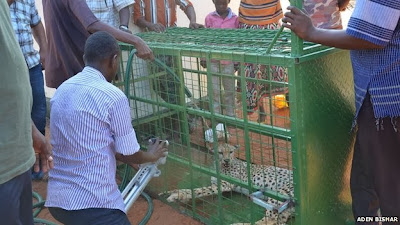 To start the new year, here's an inspiring story of people standing up to bad animals:


BBC - Four villagers in north-east Kenya have chased down and captured two cheetahs which were killing their goats.

The owner of the goats told the BBC that the cheetahs had been picking off his animals one by one, day by day.

"These cheetahs killed 15 of my goats - they were coming to my house daily to kill my goats," he said.

But wait, you might say: Cheetahs are the fastest animals on earth. They chased them down on foot??

Yes, because these people know their bad animals. Cheetahs are sprinters, not marathoners, and the angry goat-owner had observed their habits: in the heat of the day, they spend all their time lazing in the shade. And just as important, even though he'd finally been pushed to his limit, he didn't just strike out in the heat of passion:


"I was sipping a cup of tea when I saw them killing another goat," he said, explaining that this was early in the morning.

The men waited until the hottest part of the day before launching the chase over a distance of four miles (6.4km).

The cheetahs got so tired they could not run any more. The villagers captured them alive and handed them over to the Kenya Wildlife Service.

Let's all resolve to remember this in the new year: If you know your enemy's weaknesses and make a careful plan, you can even outrun a cheetah.