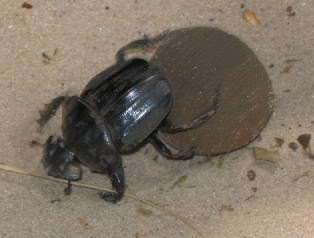 Beetles turn to murder for their meal... of dung

Science NOW Daily News - Deep in the Peruvian rainforest, one species of dung beetle has turned from scavenger to killer. Instead of feasting on feces--as all of its brethren do--the tiny insect tears millipedes in half and dines on their innards.

...Using infrared cameras, (Princeton University ecologist) Trond Larsen observed the 8-millimeter-long beetle wedging its serrated head between the millipede's segments, ultimately splitting its prey's body in two. Afterward, the beetle dismantles the rest of the millipede and eats it up. D. valgum can kill prey up to 13 times its own size thanks to subtle body adaptations, explains Larsen, including its wedged head and hind legs adapted to hold the millipede and drag it apart.

It's a "pretty spectacular finding," says biologist Armin Moczek of Indiana University, Bloomington. But he points out that millipedes have a high proportion of feces inside them because they feed on rotting plants. So if the dung beetles are eating their guts, he speculates, they're essentially still eating dung.

Normal dung beetles are actually useful to the ecosystem, if disgusting, since they clean up what other animals leave behind. These guys don't even have that excuse.